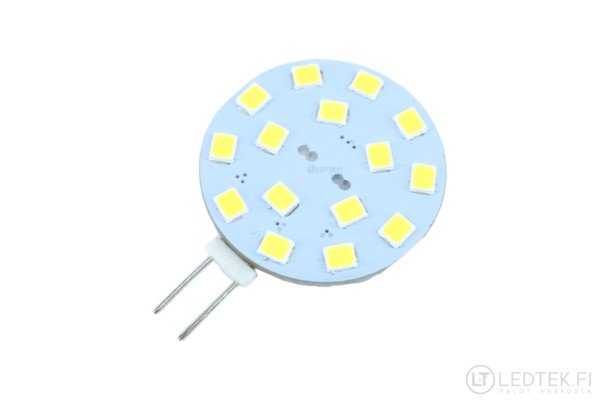 12 Volts G4 coin LED. Dimmable with normal LED dimmers and when installed after triac LED drivers. 2.8 Watts of power and LED operating voltage range 10-30V. In practice it works with 12 Volts LED drivers and 24 Volts LED drivers in battery systems where it is desired to minimize light consumption.The quality of light is good and color is natural white 4000K. The driver is chosen based on the size of the lighting group. So you can choose for example 8 pcs = 8 x 2.8W = 22.4W and then you will need an LED driver. For example one 30W 12V POSYou can install these in dry and damp locations. IP classification is determined by the light frame. The G4 LED itself does not have water protection. If you have 12 Volt needle pin halogens on the ceiling, you already have wiring for 12 Volts. You only need to choose a required amount of these 12 Volt LED spotlights and a suitable LED driver. Of course there can be more than one driver and group, but for a small group one driver is enough. For dimming you can choose an LED dimmer with a remote controller or for example put a rotary knob dimmer in a flush-mounted box and a triac dimmable LED driver for it.

Show reviews in all languages (2)