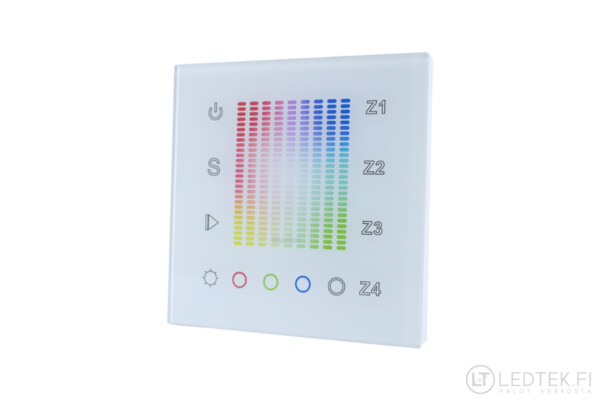 Elegant RGBW TOUCH LED dimmer for RGBW LEDs. Advanced, well-reacting touch panel thanks to which it is comfortable to use. The panel recognizes a finger immediately, rather than with a small delay. The touch panels from a few years back did work, sure, but they had some delay in reaction time.

You can have this touch panel or several + RGBW remote controllers in the same system. This TOUCH panel can be paired with more than one receiver. There is one memory slot (S) in the controller where you can save your favorite setting. You can control four separate groups: Z1. Z2, Z3 and Z4.

The controller has a wireless connection to receivers and it is connected like you normally would a traditional light dimmer in a flush-mounted box. Continuous current AC230V is fed to the controller.

Here you can pick this touch panel and receivers can be found in Premium Dimmers category.

The dimmer is elegantly Scandinavian.

Be the first to review “RGBW TOUCH Dimmer” Cancel Reply